Last semester I was lucky to have the opportunity to audit a few classes at the Graduate Center. Not only was I lucky for this, but also because when I arrived at the Grad Center, this was the first year these masters were happening. And that was a great surprise, since when I first manifested my wish of coming here I had no clue about it.

When I saw the courses, I could not help myself not asking if I could audit them. I was too curious, and the professors were kind enough to let me check them. I therefore audited the Introduction to DIgital Humanities (with Prof. Matthew Gold and Prof. Steven Brier), Data Analysis and Visualization (with Prof. Lev Manovich), and Data, Place, and Society (with Prof. Kevin Fergusson).

I loved them for very different reasons but I will let the full descriptions for separate articles. For now I will just accept Buzzfeed has influenced me in the creation of listicles, and proceed to such a list of what impressed me during these classes. Here we go.

I have always been susceptible to the so popular belief that AI mostly means robots, and these robots will take over our jobs. I have never felt threatened by robots, yet the dark side of AI is mostly portrayed by them. All the news about their evolution and capabilities left people with a scary conclusion: they will be so intelligent and skillful, and they will take our jobs. I couldn’t agree less.

This why I was so happy when I came across Astra Taylor’s article in Logic Magazine. I am not planning to analyze it or to summarize it but just briefly introduce it.

Basically, her point is that the discourse I had previously mentioned is embracing the idea of human replaceability in the work field. The more you feel threatened about losing a job because of an iron creature with a human-like look, the more you work: “But fauxtomation also has a more nefarious purpose. It reinforces the perception that work has no value if it is unpaid and acclimates us to the idea that one day we won’t be needed”. Taylor also gets into a short history of similar beliefs and discourses and criticizes it from a cultural perspective.

Nonetheless, I think this part pretty much emphasizes a lot of the automation debate and how we should understand it:

“Our general lack of curiosity about how the platforms and services we use every day really work means that we often believe the hype, giving automation more credit than it’s actually due. In the process, we fail to see—and to value—the labor of our fellow human beings. We mistake fauxtomation for the real thing, reinforcing the illusion that machines are smarter than they really are”.

Short Notes from the Speed Conference by Cornell Tech

Earlier this autumn I got the chance to attend Speed, an event organized by Cornell Tech. The two-day conference focused on the dimension of speed that comes along, together with scale and complexity, when talking about algorithmic oversight. Speed is also another important aspect of the way algorithms impact our lives, even though we might not think about it that often, now we got used to getting so many things so fast. But as the event description narrows it down, “when an algorithm acts so much faster than any human can react, familiar forms of oversight become infeasible”.

Even though I could only see a few of the presentations, I am going to briefly highlight some of the ideas that I found very interesting. You can check the entire schedule and the full presentation here. 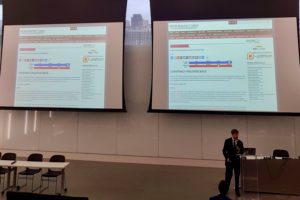 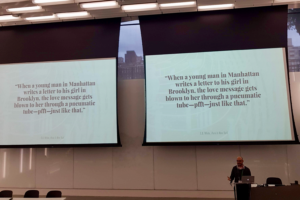 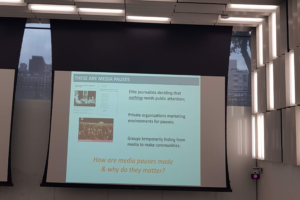 PS: Sorry for the quality of the photos. I did not even know I was about to use them here.

In September I had the chance to participate in NYC Media Lab, an event meant to gather professionals, students and researchers from New York’s media lanscape and showcase some important innovations in the field. I found it extremely helpful and inspiring, and I thought I could share some ideas.

Next, I will highlight some of the things that sparked my attention. I will start with the first keynote, which was a presentation by Thomas Reardon, Co-Founder and CEO of CTRL-Labs, on the future of neural interfaces. Which is, they argue, the concept of “intention capture”. This process is translating human intention into action through neural networks, which “decode the hidden language of biological neurons using neuron-inspired algorithms”. It was very interesting to see some video examples of how one might text on their phone without using their hands, for example — just with the help of this tool (if I might call it just a tool) which uses the neurons’ signals.

As the presentation was going on, I guess for many of us the future seemed a bit scary, not just innovative, because it looked like scenes of Science Fiction are parts of our present now. But I liked the way Reardon argued the necessity of this projects or other similar projects. Basically, from what I have understood, he said the the more control you have, the more mental energy you you have to be the “social animal” we need to be nowadays. Which I find somehow true, it might be difficult to keep up with the speed of information today. He also emphasized the switch from learning how to control a machine and using it to actually controlling the machine. You can read more about it here if you are interested.

After the keynote, there was a showcase of projects made by students from different universities within the past year, in collaboration with different companies, and supported by NYC Media Lab. The projects covered different topics, from history, to press freedom or health, and used technologies like VR or even blockchain. You can find them here. Personally, I liked the “Let’s Make History” and “Secret Club” the most.

My favorite part of the conference was the debate on Synthetic Media. This new form of media stands at the intersection of computer generated images, voice and video. The reason why it is under debate is because it became such an easy weapon for deep fakes or other forms of fake news, which are definitely a threat to democracy. The participants were Manoush Zomorodi, Stable Genius Productions; Matthew Hartman, betaworks; Karen Kornbluh, Council on Foreign Relations; Eli Pariser, Omidyar Fellow, New America Foundation; Ken Perlin, NYU Future Reality Lab. And it was interesting to see how they covered the good, the bad and the ugly of this new form of media. Among the good parts, the fact that it is a great way for artists to create new projects, and by knowing how synthetic media works, we also become more aware of how it can be used for “evil” purposes. The downside is still represented by the fact that it is quite easy to generate such media, therefore anyone can be a deep fakes creator — and this is obviously a problem. Nonetheless, I have also participated to the workshop related to synthetic media so anyone who’s interested in the subject can send me an e-mail and I’d be glad to share my notes!

The 100 demos exhibited within the event were definitely worth checking. All the projects I had managed to see were both very creative and meant to have a social impact. Good representations of text mining, natural language processing or VR / AR. You can check them here, I believe most of them also have a website!

Need help with the Commons? Visit our
help page Send us a message
Skip to toolbar

Built with WordPress | Protected by Akismet | Powered by CUNY